Skip to content
www.autoenginelube.com is a participant in the Amazon affiliate program,As an Amazon Associate, we earn from the qualifying purchases of recommended product links. Learn more. 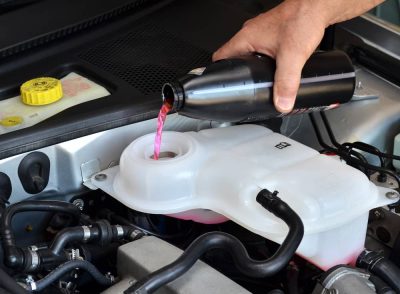 Oil cooler passageways in a 6.0L Powerstroke engine can clog up easily, thus regular maintenance on the cooling system, with a good understanding of the right 6.0 Powerstroke Coolant Capacity, is critical to keep them clear.

The high percentage of silicates in the stock Motorcraft Gold coolant is usually blamed for oil and EGR cooler problems.

As a result, we’ll be providing information on significantly improved Extended Life Coolants plus conducting our personal ELC switch on the 6.0L Powerstroke shop.

Most 6.0L Power Stroke’s cooling system can hold 6.875 gallons of coolant. Everything in the cooling system is now distilled water, and you must have removed 3.5+ quarts of it during your last drain.

The cooling system should now be empty, and should be filled to the degas bottle’s indicator with 3.4 quarts of the engine coolant concentration, then topped off with distilled water.

You like also our best guide on ford 6.2L engine oil capacity.

What is 6.0 Powerstroke Engine?

Since 1994, the Powerstroke was an engine family that has been a re-branding of Navistar International’s Medium-Duty truck engines, which were renamed Powerstroke 7.3.

Later, the 7.3-liter Powerstroke engines were phased out in favor of the 6.0-liter (365-cubic-inch) engines in late 2003. In the Ford Super Duty trucks, the 6.0L Powerstroke was utilized until the 2007 model year.

But remained until 2009 inside the line of Ford vans call (Ford Econoline vans), (2010 model year), and also inside the Ford Excursion SUVs till after 2005 versions when Ford ended Excursion manufacture.

What is 6.0 Powerstroke Engine Coolant System?

There are a plethora of chemical combinations and formulations for engine coolant/antifreeze.

All 6.0L Powerstrokes were supplied with the Motorcraft Gold type of engine coolant when they were manufactured.

The silicates found in Motorcraft Gold are made up of oxygen and silicon atoms.

Thermal breakdown occurs, and silicates are driven out of suspension, resulting in the formation of clogs in the oil cooler, as a result of this process.

The 6.0 Powerstroke best coolant of Ford’s Motorcraft Gold engines has been recognized as a plausible (likely) cause of oil cooler clogging in the 6.0L Power Stroke.

Which year and model of ford engine have 6.0 powerstroke coolant system

In the 2nd quarter of the model year 2003, the 6.0 L took over. In the Ford Super Duty trucks, the 6.0L Powerstroke was utilized until the 2007 model year, but remained inside the Ford Econoline vans until 2009 (2010 model year) and inside Ford Excursion SUV line until after the 2005 versions when Ford ended Excursion manufacture.

Click this link to learn more about the best year 6.0 Powerstroke to buy!

How often should you change the coolant in a 6.0 Powerstroke?

What kind of coolant you choose and how you drive your truck will have an impact on this one? After three years and 25,000 to 30,000 miles, any type of coolant is still good to go.

An HD coolant of high quality will last for five to six years, or around 150,000 kilometers. A little more time in a nice ELC.

Just follow the instructions in your owner’s handbook if you don’t know anything about coolants.

Before changing the coolant, Ford suggests that you apply VC-9, an iron-removing flush chemical.

What coolant should I run in my 6.0 Powerstroke?

When you keep your engine cold, you prevent the creation of heat that could ruin the entire engine block.

Here are our picks for a good 6.0 Powerstroke coolants you can find around:

As long as you’re looking for the greatest quality, the best choice for 6.0 Powerstroke coolant is EVANS formula.

The chance to get rid of any kicks you can feel before ignition, as well as during internal combustion, is a terrific one.

Since it lacks water, this coolant is virtually guaranteed not to damage your engine block and has one of the greatest boiling temperatures available.

Restore missing additives and prevent roadside breakdowns are some of the advantages of using this product.

You can successfully archive this using these 6.0 Powerstroke coolant flush chemical from amazon –

Allowing more heat to be transferred outside of your radiator, this coolant reduces surface tension in your engine.

That means you can enjoy the same high-performance from your Powerstroke engine without having to think about it overheating.

Additional benefits include a more uniform temperature under the hood, thanks to this coolant.

You can even use it to protect aluminum components of your engine from corrosion for the long haul. The best part is that it’s safe to be used in a mixture of water and anti-freeze.

The EC53001 high efficiency engine coolant from EVANS Cooling Systems is ideal for engines like the 6.0 Powerstroke that are regularly subjected to high loads.

In all gasoline engines, as well as in light-duty diesels used in industrial applications, it performs well.

As this coolant has a heat point of 375 O F, you can see how it can help you get the most out of your engine’s power.

A waterless coolant that won’t evaporate, boil over, or after-boil thanks to its special formulation. The cooling system of an engine is less stressed because of the lower pressures created.

In addition, no engine parts will corrode as a result of the design. All of this works together to keep your Powerstroke running smoothly and reliably by preventing pre-ignition knock and engine knock.

The quality materials used in the construction of this engine coolant reservoir ensure that it will stand up to the rigors of the engine vibration and underhood heat. It is manufactured and engineered to suit the fit and purpose of the original item.

This part has the following features –

There may be a problem with your oil cooler if you see oil or coolant pouring from the cooler or if you notice your engine coolant has been contaminated with oil.

The Viton Gasket seals included in this cooler kit are vital for adequate service on your automobile. It’s made by AA Ignition and is a direct replacement for the original.

This cooler kit isn`t made by Ford or Dorman and should not be considered such.

Ford and their corresponding vehicle models and component numbers are used only to indicate the automobiles that this oil cooler set is designed to work with.

There has been a history of problems with the Powerstroke engine’s Fuel Injector Control Module (FICM). The solenoid voltage is supplied by the FICM.

Two solenoids supplied with electricity from the FICM govern how much oil enters the fuel injectors. The FICM is also affected by engine heat and vibration, leading it to overheat and fail.

The 6.0L Powerstroke engine has been known to have issues with the EGR valve. This valve controls the amount of exhaust gas that is recirculated into the engine.

The EGR valve can be clogged by soot from the exhaust, resulting in its failure.

Your Superduty truck’s engine performance will suffer if the EGR valve becomes stuck open as a result of using subpar diesel fuel.

The TTY head studs or torque-to-yield are the crux of the Powerstroke’s head gasket problem.

Because of aftermarket modifications, many Ford Superduty operators have discovered that the TTY head bolts are not capable of handling the increased pressure under their head gaskets.

A blown head gasket is the result of faulty TTY head studs.

The 6.0L Powerstroke gasoline engine’s oil cooler can also be a source of concern.

Ford installed a liquid-on-liquid oil cooler in the 6.0L diesel engine since the Powerstroke engine requires more cooling than other diesel engines.

The oil cooler becomes clogged with dirt and debris, and as a result, the EGR cooler begins to fail.

The EGR cooler of your Ford Super-Duty engine might potentially fail due to clogging, in addition to the failure of the oil cooler detailed previously.

This increases the EGR cooler’s temperature, which eventually causes failure to your head gasket as well.

A white exhaust will come out of your Ford’s tailpipe if your EGR coolers leak coolant into the exhaust system.

Click this video to know about the problems with this engine!

How much does ford charge for a coolant flush?

The advantages include: The process of depositing large blocks of material Prevent breakdowns on the side of the road by replenishing depleted additives.

Is it necessary to make an appointment to have my Coolant Flush performed?

A coolant flush does not necessitate an appointment. Welcome to our Quick Lane, where we’ll be pleased to assist you in any way we can.

However, the Quick Lane may get rather crowded at times, so it’s always a good idea to make an appointment ahead of time.

Approximately how long would it take to execute a Coolant Flush?

In most cases, an Automatic Transmission Flush takes between 1-2 hours to complete the task. The only caveat is that if we’re swamped, it may take longer than usual to get your car in.

To flush the cooling system, you need to first understand the 6.0 Powerstroke Coolant Capacity.

You don’t need any special tools, but you should budget at least a full day for the job because you’ll need to drain, flush, and drive multiple times to get the job done.

Coolant breakdown and the subsequent accumulation of silicate gels inside the cooling system are the primary causes of oil cooler clogging problems on the 6.0L Powerstroke.

After the standard service of 100,000 miles/5 years, Ford advises changing the engine coolant every 45,000 miles/3 years.